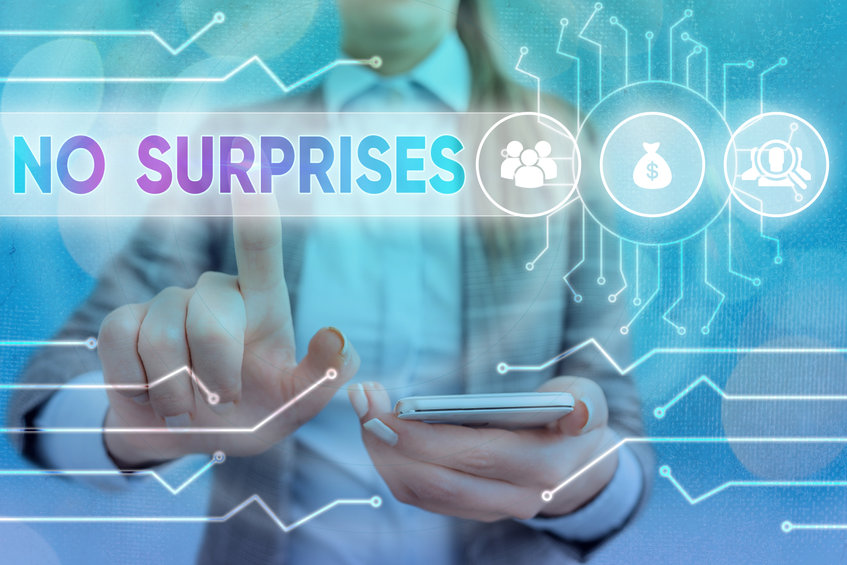 The No Surprises Act – What Is It?6 min read

In a Kaiser Family Foundation survey, data showed that one-third of insured patients had received a surprise medical bill in the past two years. An additional 67% said they had concerns about receiving a surprise medical bill.  Data from Health Care Cost Institute showed that even when being treated at an in-network facility, one in seven patients received a surprise, out-of-network bill. Those surprise bills most likely occurred due to the patient being treated by a provider, such as a radiologist or an anesthesiologist, who was not in their insurance network or received treatment not covered by their insurance plan.

What is The No Surprises Act?

The No Surprises Act (NSA), passed in December 2020 as part of the Consolidated Appropriations Act of 2021, is aimed at eliminating those large unexpected medical bills. The act speaks to both emergency and non-emergency treatment where a patient is balance billed after treatment from an out-of-network emergency facility, an in-network facility but was seen by an out-of-network provider, or for an emergency where an out-of-network air ambulance is utilized. The deadline to be compliant with this act is January 1, 2022. The two main types of providers that need to comply with the new law are freestanding emergency departments or hospitals and emergency departments and providers who administer care at in-network facilities but who themselves are out-of-network with the respective health plan.  Balance billing is currently banned in both Medicaid and Medicare, however, this new law will extend this protection to those insured through employer-sponsored and commercial health plans.

Basically, in these specific situations, a provider cannot bill a patient more than the agreed-to amount of the in-network negotiated rate for that service, even if they are out-of-network.  Putting the responsibility on the provider and payers to negotiate payments before the patient ever sees a bill.  This puts providers in the position of developing relationships with payers they may not already have a relationship with. It also means that these organizations will have to not only work through disputes with each other but put in place standard processes for compliance and claims submission.

Having providers reach out to payers first is going to be a new practice for a majority of providers. Revenue cycle management teams will be tasked with rethinking traditional processes to be able to comply with the No Surprises Act. Before now, out-of-network patients would get the bill from the provider, it would be their responsibility to work with their health plan on any kind of reimbursement, which will not be the case after January 1, 2022.

In addition to the above, the No Surprises Act will also establish an independent dispute resolution (IDR) process to specify how much providers get reimbursed for out-of-network care by payers should they not be able to come to a compromise on their own.  In the meantime, an Interim Final Rule was released by several US departments, including Health and Human Services (HHS), Office of Personnel Management (OPM), Department of Treasury, the Internal Revenue Service, and the Department of Labor’s Employee Benefits Security Administration to furnish more details.

There are six provisions covered in the Interim Final Rule for NSA:

Within the NSA penalties are also outlined for providers who violate the law. Hospitals may be subject to penalties of up to $10,000 per violation.  Those penalties can be waived by the HHS Secretary if:

In addition to these rules, there may be state laws already in place that pertain to surprise billing.  The Interim Final Rule doesn’t give enough detail to determine when state laws apply.  This makes it difficult for revenue cycle management teams to develop plans to be able to implement the NSA. Right now, revenue cycle management teams should expect to apply both the federal law and the requirements of its state until more information is provided.

The NSA states that health plans make an initial payment to the provider or send a notice of denial within 30 days of the date of receiving the claim. However, it doesn’t set the reimbursement amount.

Should the two parties not be able to come to an agreement then an arbitrator will be appointed to settle the matter. The law is missing some specifics on this point and more information is yet to be handed down.  More regulations are set to be issued by December 27, 2021. These very anticipated regulations will be the rules that will establish an entirely new federal arbitration process to determine out-of-network reimbursement amounts for charges covered by the NSA.

Although HHS has promised revenue cycle management leaders will have time before the next IFC is released for providers to comply with the rule’s provisions, the suggestion is that they start the process of compliance now.  With the information they have at hand they can start outlining their approach to the IDR process and be ready for January 1, 2022.

Who is Billed Right?

In 2006, two business partners had a vision of creating holistic services that can help improve medical billing operations. They started by listening to doctors and building a service model around what doctors need the most. As a result, Billed Right’s Revenue Cycle Management (RCM) model was born. The focus continues to be on solving the problem, rather than selling a product, and hence, Billed Right’s advanced RCM model revolves around personalized service in today’s corporate world, while still cutting costs and improving both patient care and practice revenue. No matter what challenges physicians face, we never waiver from our goal to be a partner in strategy to promote practice growth.

Contact Billed Right to learn more about our services.

Have Questions?
Call Now for Assistance